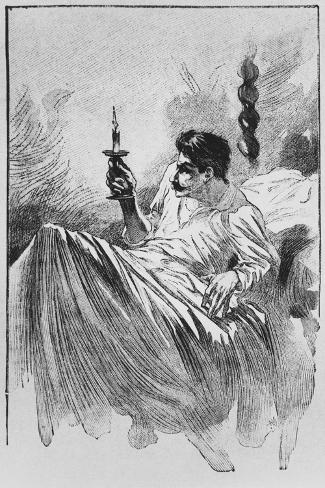 I love old timey horror, because I find most contemporary horror too intense. The 1887 Guy de Maupassant novella “Le Horla” was perfect for me– important and influential (it gave H.P. Lovecraft ideas for Chthulu), not too scary, and accessible to intermediate french readers. Plus, someone actually yells, “Oh! quelle horreur!”

It is 30 pages, in the form of diary entries. I read it after Harry Potter book 3 and it was slow going but doable. There are maybe 5 words that are important to the plot that you need to look up, and the rest of the time you can guess which words refer to types of anxiety and which ones refer to types of trembling. I have found Maupassant’s writing too flowery in english, but in french I thought it was lovely. His habit of making elaborate descriptive lists was even helpful for learning vocabulary. When something is as enormous as a galaxy, as deafening as thunder, and as invisible as the wind, it is easy to guess the meaning of those adjectives.

Like many stories about hauntings, one way to read Le Horla is as a story about settlers and imperialists grappling with the harms of their colonial projects. Instead of the more typical scenario where an “Indian Burial Ground” produces angry ghosts in american suburbs, we watch an upper class French narrator realize he’s being enslaved or colonized by an incomprehensible alien force. He spouts some racist nonsense while grappling with his horror, but I took satisfaction in watching a european deal with the receiving end of colonization and the limits of his scientific knowledge.

Since the story is public domain, you can find the text online or order from one of those cheap public domain publishers. I liked this free audiobook of Le Horla on archive.org for listening practice, but there are many others available for free online.